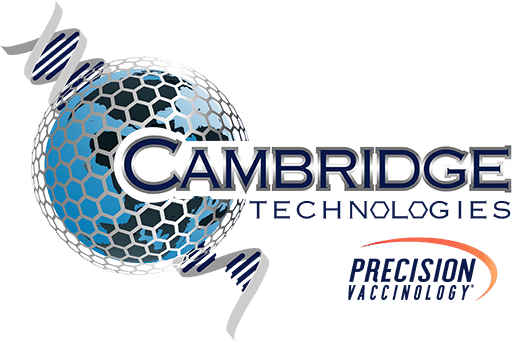 First identified in 2011, Influenza D virus (IDV) has been found in swine, cattle, sheep, and goats from multiple geographic locations worldwide1. A member of the Orthomyxoviridae, IDV is a single-strand, negative-sense RNA virus with seven genomic segments. Influenza C Virus (ICV) is genetically the closest member of the influenza virus family, although the two share less than 50% protein sequence identity4.

Using a combination of diagnostic tests, a research team led by Dr. Ben Hause (now the Vice President of Research, Development, and Diagnostics at Cambridge Technologies) was the first to isolate this novel virus from an Oklahoma hog in 2011. Originally designated as C/swine/Oklahoma/1334/2011 (C/OK), the strain was found to be widespread in cattle throughout the United States6.

An Ongoing Threat to Cattle

BRDC is one of the most common, yet most complex, health issues facing today’s cattlemen and veterinarians. Affecting an estimated 97 percent of United States feedlots and 21.2 percent of cattle10, the disease carries an average treatment cost of $23.60 per case15. Often referred to as Shipping Fever or Pneumonia, BRDC involves a number of factors such as the age, environment, and immunity of the animal as well as numerous bacterial and viral pathogens.

Collin, et. al., demonstrated that IDV is commonly found in clinical diagnostic samples of bovine respiratory disease complex (BRDC), with prevalence similar to other established BRDC etiological agents. In addition, they discovered that there are at least two co-circulating lineages of the strain in U.S. cattle herds, which would indicate that it is endemic in cattle and that the virus re-assorts frequently3.

One study identified 21 distinct viruses in samples taken from a population of feedlot cattle with acute BRDC. Interestingly, a statistical analysis of the association between virus detection in asymptomatic and acutely-ill animals found that of those 21 viruses, only IDV was a risk factor of moderate significance (P < 0.15)13. In another study, calves experimentally infected with IDV (via internasal challenge) were shown to shed virus and seroconvert. The infected calves transmitted the virus to IDV-seronegative animals through contact, and they showed mild disease signs (dry coughing, nasal and ocular discharge, depression) as well as tracheal inflammation3.

While IDV was first identified in 2011, recent studies have indicated that the virus has been circulating in cattle in different parts of the country for a number of years prior. In 2014, Luo, et. al., retrospectively tested sera originally collected from 40 randomly selected Nebraska beef herds in 2003-2004, and found that all 40 contained seropositive adult animals. In addition, approximately 98% of calves born in 2014 had high levels of maternal antibodies against IDV. These results indicated that IDV was present in Nebraska beef cattle since at least 2003, eight years prior to the official discovery of the virus11.

A separate study of archived sera suggested that IDV has been circulating among cattle in Mississippi since at least 20045.

As BRDC often involves a number of bacterial and viral agents, diagnosis can become a multi-step process. Both clinical specimens and sera samples can be used in an attempt to identify the specific virulent strains involved. Nasal swabs can be screened via reverse transcription-quantitative PCR as well as viral isolation, with further classification conducted with viral isolation and sequencing2.

Cambridge Technologies and other select laboratories have the ability to take the diagnostic process even further, using metagenomic sequencing. This process can generate massive amounts of sequencing information, utilizing random priming approaches to non-specifically amplify the nucleic acids present in a sample1. Metagenomic sequencing brings the advantage of not needing proper knowledge of virome composition for DNA sequencing8, and protocols are available that are capable of detecting both single-and double-stranded DNA and RNA viruses9.

A dual approach of real-time PCR and metagenomics, in carefully matched cases and controls, can provide a rapid means to identify viruses-associated complex diseases such as BRDC, including both close relatives of known viruses and “new” highly divergent viruses14.

Research has shown that an inactivated IDV vaccine can be protective against disease caused by homologous challenge7. Currently, IDV vaccine is only available in autogenous formulations.

Cambridge Technologies is at the forefront of the battle against IDV and BRDC. Our Research and Diagnostic teams are led by Dr. Ben Hause, who first identified IDV. Using industry-leading diagnostic technology and innovative autogenous vaccine formulation, Dr. Hause and Cambridge Technologies can assist veterinarians and producers in developing a targeted, flexible approach against BRDC.

Our industry-leading molecular diagnostics, including metagenomics and next-generation sequencing, identify the specific threats and antigens that need to be included in the product. Then, the experienced production team can formulate and manufacture a vaccine customized to the needs of each individual customer, including antigen concentration, multiple adjuvant choices, dose sizes, and the option of SoliDose implants. Should a new strain or agent emerge in the future, upcoming manufacturing runs of the autogenous product can be altered to include the new threat.

Clinical cases of BRD are usually treated with antibiotics. However, the recent implementation of FDA guidance 209 and 213 along with the expansion of the Veterinary Feed Directive has created a need for an alternative to managing animal health. Autogenous vaccines from Cambridge Technologies offer veterinarians and their clients a flexible management tool to counter emerging and evolving diseases, such as the threat of IDV.

Influenza D Virus (IDV) has been shown to be one of the numerous agents in the Bovine Respiratory Disease Complex (BRDC). It is believed to be endemic in U. S. cattle and is unique among the four known species of influenza virus.

Cambridge Technologies utilizes cutting-edge diagnostic technology to precisely identify the pathogens contributing to BRDC – including IDV. Once the pathogens have been identified, an autogenous vaccine can be formulated to target those specific bacteria and/or viruses. Ongoing diagnostic monitoring and the flexible nature of autogenous products enable veterinarians and producers to modify the product as needed should the disease threats change.

Experience and Technology Working for You!

!
Subscribe
Something went wrong. Please check your entries and try again.
Design by: